Welcome to my research website. Most of my contributions are made in the form of publications in journals, books or conference proceedings. Please visit the publication page to see the full list of publications (all downloadable). You can also visit my Research pages where I summarize my research lines. Ocasionally, I write posts with some ideas, material, or to announce some publication or changes in my academic life. See below. And welcome.

END_OF_DOCUMENT_TOKEN_TO_BE_REPLACED 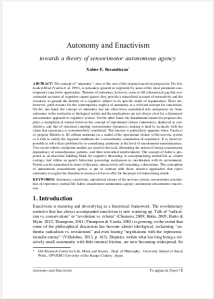 I have finished the last revision of journal paper entitle “Autonomy and Enactivism“. It explores the conceptual tension between the concept of autonomy (self-organized closure of neural activity) and the sensorimotor constitution of cognition. I have long witnesses a generalized confusion, whose roots I explore in the paper, between two major schools of enactivism (the cognitive science paradigm that focuses on sensorimotor coupling and self-organized dynamics of brain, body and environment). On the one hand what I have called “sensorimotor enactivism”, a school that has gained momentum thanks to the work of Alva Noë and Kevin O’Regan on sensorimotor contingencies. On the other hand what I have called “autonomist enactivism” with a particular focus on biological embodiment and the self-organized nature of brain and body. The gap between both schools has being growing recently, partly motivated by the lack of a clear notion of sensorimotorly constituted neurodynamic autonomy. Building upon the work I have been doing with my colleagues (Di Paolo, Buhrman, Santos, Aguilera and Bedia) during the last years I hope to have contributed to the compatibility and mutual reinforcement between both schools of thought. It is a long paper, and the contribution does not limit to a historical or contingent dispute between schools of thought: the reconciliation demands to develope a theory of sensorimotor autonomous agency and touches upon foundational aspects of cognitive science, from the emergence of norms to the epistemology of mechanistic explanations.

END_OF_DOCUMENT_TOKEN_TO_BE_REPLACED

Just finished developing the new site for IAS-Research Centre for Life, Mind, and Society. I hope it will be really useful to improve visibility, dissemination and internal coordination of research activity. We used WordPress as a platform with lots of very useful plugins that help generate publication lists, event’s calendars, etc. Thanks to Thomas Buhrmann for his valuable contributions to the site and GISA for the deep server infrastructure.

We have just started the eSMCs Summer School entitled The Future of the Embodied Mind. The discussion is already taking place both online and during the conference. Check out the website for more information and resources. Very exciting discussions going on, also a lot of work but the outstanding quality of speakers and participants is worth the effort.

Already integrated in my new working environment: Paris! I have my base camp at CREA (Centre de Recherche en Épistémologie Appliquée), an interdisciplinary research center that is part of École Polytechnique and the CNRS, but I will also participate and collaborate at the Complex Systems Institute (ISC-PIF). I am already co-organizing the Theoretical Biology Seminars – Séminaire de Biologie Théorique, and I hope to start collaborating on cognitive science research soon.

The Journal of Adaptive Behavior has recently published a target article by Barbara Webb entitled “Animats vs. Animals”. I was invited to write a critical response to her paper and joined Anthony Chemero to defend a variety of models in science, ranging from the most concrete to the most abstract.

END_OF_DOCUMENT_TOKEN_TO_BE_REPLACED

I have just recently submitted the last version for publication of a new paper, together with Ezequiel Di Paolo and Marieke Rohde: Defining Agency. Individuality, Normativity, Asymmetry and Spatio-temporality in Action, to be published soon on a special issue on Agency edited by Mareke Rohde and Takashi Ikegami on Adaptive Behavior journal.

END_OF_DOCUMENT_TOKEN_TO_BE_REPLACED

I recently got a postdoc grant from the Spanish Ministry of Education and Science to work at the Centre for Computational Neuroscience and Robotics, at the University of Sussex. Check out my Postdoc project: “Artificial Mental Life. A study of Brain­-Body­-World integration through neurocognitive robotics“.

END_OF_DOCUMENT_TOKEN_TO_BE_REPLACED

Welcome to my new website. Hope you can enjoy it. My old websites at Sindominio and IAS-research is difficult to update at the Web 2.0 era and I really needed an academic site to freely post my recent publications and ideas. No need for the, ever changing, university based websites any more, having such a good tool as Free GPL WordPress.